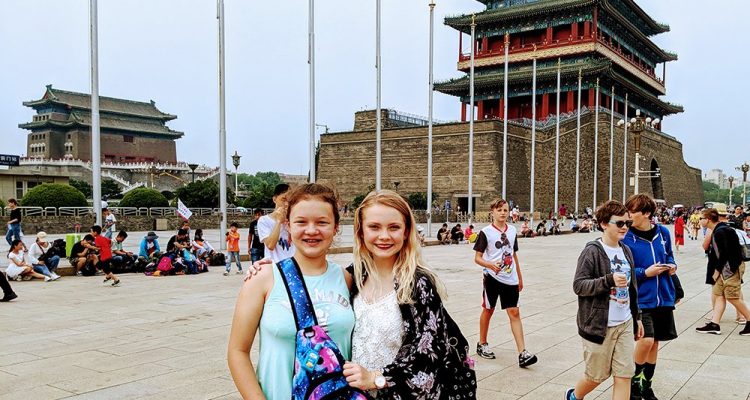 Two students from The ASK Academy, a Rio Rancho, New Mexico charter school focused on STEM and biomedical engineering, came to Sigma for help with a project. Abigail Catanzaro and Garnet Waldrop, both entering 8th grade, needed a cover and scoop for their robot, Suomo. They were headed to the RoboRAVE International SumoBot competition in Conghua, China to compete against more than 700 hundred students from 26 countries in July.

Both young women are fiercely competitive and had taken 17th place out of 94 teams at RoboRAVE North America a few months earlier in Albuquerque. Suomo was built from Lego parts, a motor, wiring and software that they programmed to push other robots out of a marked area, like Sumo wrestling.

The team’s proposal had specific parameters:

The students’ proposal showed they understood the engineering principles behind their request. They wrote, “Increasing the mass by adding a metal case will also increase momentum. Force = mass X acceleration (one of Newton’s big 3 laws). Momentum is needed to cause a fast reaction to push other robots off the mat.

Scoops are used much like a bulldozer to push other robots out of the tournament ring. They can also be used to scoop under opposition and knock them off balance. Our design has a front scoop, but we can’t figure out how to build to meet the size requirements and effectively use it to demolish our opponents. We welcome your ideas on how to improve the scoop and still meet our max volume.”

“Creating a proposal, being part of the design and engineering process, and being able to make modifications to code gives them a huge advantage as female engineers,” said Darren Beckett, Sigma’s CTO. What better way to engage students in the STEM areas than assisting them with this project?”

But in China just one day before the competition started, Abby and Garnet learned that the rules had changed and their robot had been placed in a different category. Metal parts would no longer be allowed in the LegoBot division. The were to compete instead against heavier, bigger, faster bots with more power.

“We thought about taking the cover off and competing in our original division, but decided it wouldn’t be best. Our robot was smaller than the others in the Lego division,” says Garnet.

Instead, the team placed lead shot in Suomo’s wheels and battled on. Suomo performed well, placing 11th out 36 teams, and one just spot away from the finals. Far from being disappointed, the team was thrilled to have finished so well against tough competition.

And Sigma was delighted to have been a part of an educational and fun experience for Abby and Garnet.

Earlier this month, I had the pleasure of being interviewed by Sigma partner, Dillan Drake,…

A week ago, we announced that we are now operating as Sigma Additive Solutions. This…

Recent News
Recent News
Sigma specializes in the development and commercialization of real-time monitoring and analytics solutions.
LEARN MORE
Back To Top
We use cookies on our website to give you the most relevant experience by remembering your preferences and repeat visits. By clicking “Accept”, you consent to the use of ALL the cookies.
Cookie SettingsAccept
Manage consent

This website uses cookies to improve your experience while you navigate through the website. Out of these, the cookies that are categorized as necessary are stored on your browser as they are essential for the working of basic functionalities of the website. We also use third-party cookies that help us analyze and understand how you use this website. These cookies will be stored in your browser only with your consent. You also have the option to opt-out of these cookies. But opting out of some of these cookies may affect your browsing experience.
Necessary Always Enabled
Necessary cookies are absolutely essential for the website to function properly. These cookies ensure basic functionalities and security features of the website, anonymously.
Functional
Functional cookies help to perform certain functionalities like sharing the content of the website on social media platforms, collect feedbacks, and other third-party features.
Performance
Performance cookies are used to understand and analyze the key performance indexes of the website which helps in delivering a better user experience for the visitors.
Analytics
Analytical cookies are used to understand how visitors interact with the website. These cookies help provide information on metrics the number of visitors, bounce rate, traffic source, etc.
Advertisement
Advertisement cookies are used to provide visitors with relevant ads and marketing campaigns. These cookies track visitors across websites and collect information to provide customized ads.
Others
Other uncategorized cookies are those that are being analyzed and have not been classified into a category as yet.
SAVE & ACCEPT